Conservation at Work is collaborating with MammalMap Project through Robin Colyn from NCC Environmental Services. Robin is currently updating distributional data of mammals in the Cape of Good Hope as part of his Masters degree in Conservation Ecology. Conservancies will give us a vital window into mammalian distribution within these natural landscapes.

The Cape Peninsula, positioned within the Cape Floristic Region, is recognised as an area of significant biological importance and hosts a National Park classified as one of the 34 global hotspots and a UNESCO World Heritage Site. Conversely the immense natural diversity hosted within the Cape Peninsula is placed under serious pressure and threat through urban and agricultural developments. In order to effectively conserve what remains, we need to know ‘what’ is still present and ‘where’ it occurs on the peninsula.

The Cape Peninsula Mammal Atlas Project aims to address the crucial ‘what’ and ‘where’ questions by updating the distributional data of all mammals on the peninsula. The project is a collaborated effort between University of Cape Town (UCT) Biological Sciences, Cape Peninsula University of Cape Town (CPUT) and NCC Environmental Services, but will rely on efforts from conservation authorities, scientists and citizen scientists if it is to truly succeed.

All data (including camera trap data and photographs) collected with respect to mammal presence in a given area will be stored in a virtual museum hosted by the ADU. The beauty of this project is that anyone and everyone who can take a photograph of a mammal, whether in the comfort of their own garden or out in Table Mountain National Park, can contribute to the present and future conservation of mammal species on the Cape Peninsula. 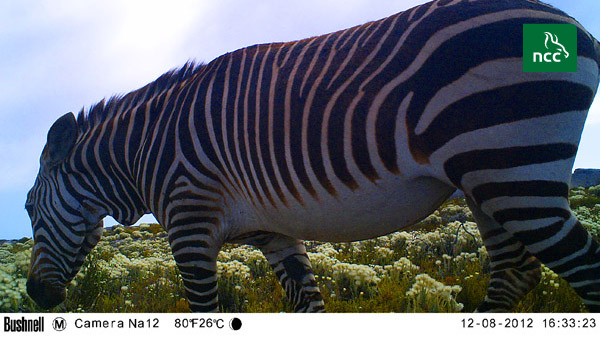 Robyn has the immense privilege of implementing the first flagship phase of the project, which aims to survey the entire Cape of Good Hope. He will be determining what species are present and where they occur within the area through the use of a large number of camera traps. A camera trap is a digital camera in a protective case which is triggered by a motion sensor. These cameras are mounted alongside paths that are thought (or known) to be utilised by animals. When an animal sets off the trigger, the camera effectively ‘traps’ an image of the animal. Those cameras which have a built in flash are able to capture images of the nocturnal animals as well as the diurnal ones. The major bonus of camera traps are that they can capture images of passing animals throughout the entire 24hr day and simultaneously eliminate human presence from the surveying process, thereby aiding animals to act more ‘natural’ in front of the camera.

The project commenced on the 2nd of December 2012 and to date has had both immense highs and disheartening lows. The absolute low must have been the morning that Robyn went to check on the cameras after three weeks of surveying with the anticipation of retrieving amazing data, only to find out that half had malfunctioned due to various technical defects! That said, thus far we have had numerous successes in terms of the distributional data that we have captured, including Cape Fox, Caracal, Porcupine, Chacma Baboon, Common Ostrich (although not a mammal, included in the Cape of Good Hope study) and six antelope species! To date the project is a great success and is contributing to the distributional knowledge and conservation of the mammalian species found on the Cape Peninsula.